This past week was a crazy one for news. And news is the business I am in. And when things are as busy as they have been you tend to move into auto-pilot, but today I am slowing down and taking some time to reflect. To really focus on the events of this past week I need to take you to September 20th, 2001 (or thereabouts).

I was flying to Dallas, TX for a wedding. It was shortly after people were allowed to fly again after 9/11. I was flying from DC where I had had a front row seat to the chaos that was 9/11. I was leaving a city that was still in shock, still mourning and still fearing, and flying into a city that watched the day’s events unfold from afar.

When I landed in Texas I was picked up by the bride-to-be and her family. They were all excited for the impending nuptials. I was still raw from the attacks. I started to realize that, although 9/11 affected everyone, people who weren’t actually there (DC, NY, PA), had a very different experience then those of us in the affected cities.

I was surprised at first, but then realized they watched it all on TV and, although it wasn’t less real, their day to day life wasn’t all that changed at that point. They were able to continue with the business at hand, whereas those of us in cities impacted, felt the attacks around every corner. Whether it was flashbacks to the previous days, or increased security in our buildings, or god forbid (as in my case) anthrax scares in their workplace. It was difficult for me to be fully present at the wedding because my mind was still in DC, but I did my best and did enjoy my time in Dallas. My way of life though, was changed forever.

I wondered if a horrible attack occurred in a city I didn’t live in, would I acknowledge it, feel bad for the residents there, and then move on with my day to day life.

Flash forward a year or so and let me walk you through the time known by most people as ‘The DC Sniper’. I bring this up in our narrative because it is pertinent to the Boston attacks. For 3 weeks in October 2002 my region was somewhat paralyzed by a sniper that was seemingly randomly shooting people in the metropolitan DC area (which includes parts of Maryland and Virginia). If you are not familiar with the sniper, it was a very scary time in DC where a dozen or so people were shot from afar while doing everyday things like stopping for gas or getting coffee.  People in my region were paranoid to stop their cars and walk in public places. There was also misinformation about a white van possibly involved, which if you start to look around, you’ll realize how many white vans drive around cities every day…

One day during that crazy time in DC, I was on my way to work and was stopped in traffic. I was in the left lane and noticed a white van to my left in a turn lane. It wasn’t turning though. It was just stopped. No signal blinking. No brake lights. Just stopped in the middle of a turn lane. I think I had a panic attack. I debated calling the police. I wondered if I should scoot down in my seat. I was in stopped traffic… a sitting duck. As all this went through my mind, the van put it’s right signal on and got back into a traffic lane. Disaster averted. Fear lingering.

So when the Boston attacks happened this past week, I was able to test my initial hypothesis. Would I just acknowledge the attacks and feel bad for those affected? Would I empathize with the people at the marathon finish line? Would I understand the fear felt by those in Watertown (and Boston) locked in their homes, fearing a crazy person on the streets who meant them harm?

What I realized is that I will never be able to experience an attack from afar. It isn’t just a feeling of empathy and being able to put myself in their shoes, therefore understanding how they feel. It was a return to the exact feelings myself, of the events of over a decade ago;  I feel it all over again. And now those in Boston will join this club. They will now know, if god forbid something like this ever happens again, exactly what the feeling is. They will feel it again. You never forget it. You don’t feel it everyday, but it can come on so easily. As I told a friend yesterday, it isn’t exactly PTSD. It’s a heightened sense of surroundings and a somewhat irrational lingering fear you can’t shake. 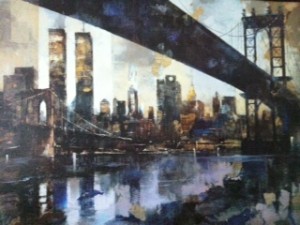 I am not saying that people who didn’t experience these events first hand don’t feel them with the same angst we do.  I am certain there are people that do.  But most people are not part of this club.  And that is a good thing.

I have recovered from those crazy days in 2001/2002.  I no longer have an emergency kit in my trunk and a quick getaway bag in my closet.  I no longer get frantic and full of fear if my power goes out.  It takes a lot of self talk, convincing yourself you are safe and everything is ok.  It isn’t always easy, but you have to do it.  You have to be strong.  And this week, I am Boston Strong.

Hoping everyone affected by this past week’s events, including those in West, Texas, are doing ok.