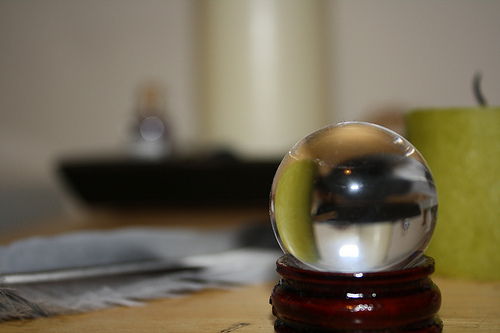 Recently I was asked my predictions for social media in 2011. I thought for a moment and realized my answer wasn’t really different than my answer last year.  I decided to review the various blog posts I’d bookmarked a year ago and see how the expert’s predictions looked year over year.

In December of 2009, Mashable, one of the best resources for social media news, had many posts on social media predictions, including this one: ‘Social Media Experts Make Their Predictions for Trends in 2010′ which linked to Trendspotting’s Influencer Series.

I’ve embedded the presentation below, but I’ve pulled out a few snippets.

Pete Cashmore, Founder, CEO, Mashable, had this to say:

“Fueled by the ubiquity of GPS in modern smartphones, location-sharing services … may become the breakout services of the year.  Our whereabouts may optionally be appended to every Tweet, blog comment, photo or video we post.

“Augmented reality: The challenge for such services is to prove their utility: They have the cool, but can they be truly useful?

“Social gaming and virtual currencies: virtual buying and selling may be the route to riches for some social media sites.”

“With augmented reality and mobile social media, the real world will be important again.

“Making content highly portable is the key to engaging an ever-more-mobile audience. More will start to see the power of content distribution and customer engagement through that content.

To understand this, I think it is important to step outside our social media vacuum.  I’ve noticed this a lot with me and my colleagues and friends.   We talk to each other about trends and emerging technologies and we ‘geek out’ over the latest apps.  We act as if everyone is doing what we are doing.  We assume all of our friends will ‘get it’ soon enough.  But the truth is, they don’t.   Not everyone is like US.  Not everyone has an iPhone.  Not everyone is on Twitter.   Not everyone shares their location.  Actually, most people do not.

It’s easy for us to say these things will be big, because as early adopters, they are BIG, to us.  So we assume the general public (aka non-early adopters) will realize why these things are important and get on board.  But you know what?  That actually takes a while.

In 2003 I was helping beta test a new social network called Multiply.  I had my own profile where I could post photos,

reviews, music, blog posts, etc.  I had a news feed where I could view the posts and updates of all my friends on Multiply.  I could filter content by relationship status, for example, only view my family’s posts, or only view my friends and friends of friend’s posts.  I really loved it.   I GOT it.  So of course I invited all my friends to join too.

To give you perspective, MySpace launched in 2003; Facebook in 2004.  My invited friends all had the same response: “What the heck is this?”  A few joined, mostly to stop me from bugging them.  Quite a few said: “Why on earth would I post photos on the Internet?”

Multiply still exists, but it never took off the way Facebook eventually did.  And this isn’t specifically about Multiply (where, by the way, I still maintain an account).  My point is that I was an early adopter and I totally understand why people would like this.  I understood about the narcissistic draw of sharing facts about your life with those you are connected to.  But my friends?  They didn’t get it.  It took a few years before I started getting Facebook friend requests from these very same people.

So the predictions for 2010 were correct.  Last year did see a ton of movement on many, if not all, of the predictions from the Trendsetter presentation (and countless other blog posts predicting 2010 trends).  But as Jason Falls noted, if 2010 was the year to learn how to use many of 2009’s technologies, 2011 will be the year the 2010 predictions begin to reach mass adoption.

What do you think?